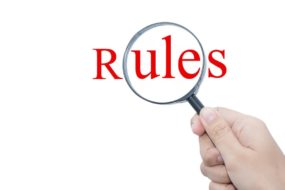 Pre July 1, 2016, a published Court of Appeal decision otherwise citable as law was automatically de-published upon grant of review by the California Supreme Court. A “de-published” decision cannot be cited as controlling authority before a court or administrative body.

On July 1, 2016, the “automatic depublication” rule changed.  The result was that a case pending for final decision by the Supreme Court remained in published and therefore citable status.  But, attorneys citing the case must also note in the citation format that the case is under review, and update citation with any subsequent orders of the Supreme Court concerning the status of the appeal.

Here is a case of interest to the employment law community, and that illustrates the “citation” point pre-July 1, 2016.  In Cardenas v. Fanaian DDS (2015)  240 Cal.App.4th 1167, 1178 [depublished automatically and not citable], a Court of Appeal held that Labor C. Sec. 1102.5 did not require proof that the Plaintiff’s claim of  violation of law required the law in question to be one of fundamental, important and well established importance. That is, evidence of a “public policy” violation was not a required element of an 1102.5 case.   The parties stipulated for dismissal of the Supreme Court appeal, and the Supreme Court obliged, and did not order the re-publication of the automatically de-published Court of Appeal decision.  Such was the likely goal of the settlement leading to the stipulation.  The order of dismissal was in February 2016.

The result is that Cardenas v. Fanaian is not a citable case because automatically de-published by the dismissal.  But what if the case had been heard and appealed after July 1, 2016, the date of the amendments to Rules of Court 8.1115(e) and 8.1105(e)?  Post amendments, Cardenas v. Fanaian would have been citable because the automatic depublication rule was no longer applicable.  Post July 1, 2016, depublication occurs only if the Supreme Court issues an explicit order of partial or full depublication.

Excerpts of the New California Case Citation Rules of Court

(e) When review of published opinion has been granted

While review is pending

After decision on review

At any time after granting review or after decision on review, the Supreme Court may order that all or part of an opinion covered by (1) or (2) is not citable or has a binding or precedential effect different from that specified in (1) or (2).

Unless otherwise ordered under (2):

An opinion is no longer considered published if the rendering court grants rehearing.

Grant of review by the Supreme Court of a decision by the Court of Appeal does not affect the appellate court’s certification of the opinion for full or partial publication under rule 8.1105(b) or rule

of Appeal opinion, whether officially published in hard copy or electronically, must be accompanied by a prominent notation advising that review by the Supreme Court has been granted.

Attorneys must now be hyper-vigilant to track appellate case status to properly cite the case.  Note the extra layer of responsibility.  Counsel must first qualify the citation as under review, and must further update the court on the changed status of the case in any subsequent trial court proceedings.

What difference will all this make?  If a trial court is presented with a Court of Appeal decision that is precedent, but also pending potential full or partial reversal, how will the trial court view that case?  Likely, the court will not rest a decision on such an uncertain outcome.  Yet, the Court, if it must reach a decision, will likely consider the appealed case for guidance. Trial judges will likely probe the case more for its reasoning and less on its holding.  You may anticipate the party most disadvantaged by the citable appealed case will emphasize its many weaknesses and likelihood of reversal.