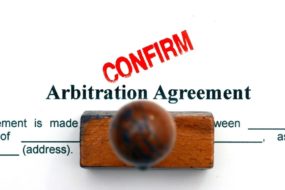 Recent federal cases clarify when a defendant employer will lose its contractual right to arbitrate.  Judge Reinhardt of the Ninth Circuit Court of Appeals wrote for a three-judge panel that an employer waived arbitration of a class action case.  The case was brought by cosmetology students who claimed that their services to customers during training had no connection to their learning experience.  They sought pay for the time conferring benefit by their labor.

Over a 17 month period in the case Yasuda attorneys attacked the pleadings and conducted discovery.  At one point,  during an attack on the pleadings, the trial court asked the defense attorney if he intended to bring a motion to compel arbitration, and even warned of the potential for waiver.   I paraphrase counsel’s response as:  “We’ll see.  Right now, we like the tatical advantage of court litigation.”

Proving waiver is not easy.  Actions inconsistent with arbitration are not enough.  Both knowledge and substantial prejudice must also be proven.

Courts, Not Arbitrators, Are to Decide the Arbitration Waiver Issue

The Ninth Circuit ruled as a matter of law that the Court rather than the Arbitrator is the proper adjudicator of whether arbitration has been waived.   The Court is in the best position to assess the significance of the proceedings held before it.

Waiver is easier to prove when the inconsisent conduct by the defendant is based on attempts to disprove the merits of the case, versus procedural attacks.

Also of significance are the defendant’s communications to the court concerning the waiver of arbitration.  If the defendant does not early communicate that it intends to compel arbitration, waiver is more likely.  In Martin v. Yasuda, the defense counsel not only remained silent, but 14 months into the litigation stated the defendant was “better off” in federal court.

Prejudice to the Plaintiff means costs of time / energy / money not  incurred by the Plaintiff himself.  These are the “self-inflicted” costs of filing, service, and jurisdiction or venue fights.  But beyond those preliminary costs, the plaintiff is harmed by the defendant’s delay in seeking early arbitration.

Here is the way the Ninth Circuit set up the “cost / benefit:”

Spending a lengthy amount of time litigating in the more complex federal court system with its rigorous procedural and substantive rules will almost inevitably cause the parties to expend more time, money, and effort than had they proceeded directly to arbitration. On the other hand, the federal court system provides advantages that some parties still prefer to retain, including the type of relief available and the potential for precedential (sic) decisions.

The kinds of costs that were “defendant inflicted” by defendant’s delay included conferences with opposing counsel to structure the class action proceedings, how to structure discovery, and contesting defendant’s motion to dismiss on the merits.  The Court pointed out that even if the information obtained by pre-trial arbitration procedures and pre-trial District Court procedures would be the same, the costs of acquiring that information is far from the same.

At the State court level, a similar reasoning is found in Groom v. Health Net (2000) 82 Cal.App.4th 1189.  The Court of Appeal held that waiver was supported by findings that the Defendant unfairly exploited the Court system to drive up costs based on 4 demurrers to successive amended complaints over 11 months.

Waiver is likely when:

2.  the defendant fails to assert an intent to arbitrate early in the case.

3.  The defendant asserts an intent not to arbitrate.

4.  The defendant attacks the case on the merits by a dispositive evidence based motion.

5.  The defendant repeatedly uses procedural attacks likely not available or successful before an arbitrator.

6.  The defendant in a class action case engages in conferences with opposing counsel to structure and manage the conduct of the class action.

7. The plaintiff can present substantial costs beyond the predictable preliminary costs associated with filing in court.