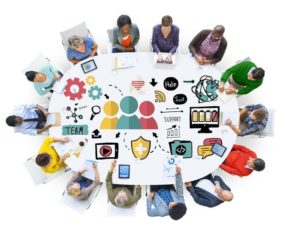 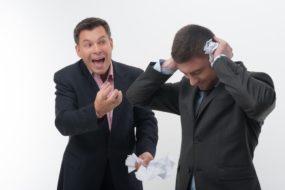 Is this the way to get things done? 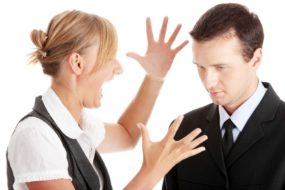 How would you rank this negotiation? 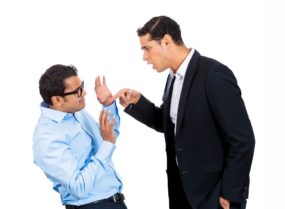 Where did H.R. go wrong in hiring this manager? 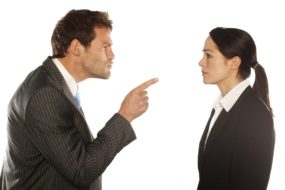 How effective is this communication?

Civility When Disagreements Are Intense

I recently completed a series of acted scenarios for fellow lawyers in my professional organization.  Judges participated as well.  The goal was to expose the dysfunction of rudeness, and explain why civility was the better option.  As a litigator, I get to see incivility up close.  I also get to see the benefits of civility in a working relationship between opposing counsel.  When civility is in place, the bloodletting is polite. Wild unnecessary swings of the blade are seen as wasteful.

Years ago a quote from John Kennedy stuck with me.  “Civility is not a sign of weakness.”  We live in a political and cultural environment where anger and hate seem to overcome good sense.  The sad part of this destructive behavior is that we lose sight of the issues and lose focus on solutions.  The antipathy kills compromise, and in most human relations, compromise is the only way the wheels keep turning.

How is it possible to feel strongly attached to deeply held values, yet compromise?  Some in families, businesses, churches and governments declare it is not possible.  Those people spend inordinate time demonizing opponents.  They are “positional” thinkers.  There is a Truth, and it will not be compromised.

Let’s assume a position thinker indeed has staked out the only true position.  She’s right.  We’re wrong.  She knows it categorically.  Her one goal is to defend her position.  She views us as the enemy.  She either converts us or destroys us.  Any “give and take” is seen as a capitulation.  Gridlock.

Not every value should be compromised.  But most values can be advanced ethically in good conscience by “give and take.”  If people are invested in one another, they value long-term relationship over short-term victories.  Settlements make sense because both sides avoid risks.  In business, the risk is money and time.  In government, the risk is a lost opportunity to advance at least part of an agenda.  In families, the risk is broken hearts and separation.

This week I heard a Sirius XM Potus commentator talk about “getting things done in Washington.”  He told the story of that great deal maker Lyndon Johnson as he took up the agenda of passing the 1964 Civil Rights Act.  Johnson could gather enough of his own party to gather a majority.  He had to turn to Republicans.  He was continuously on the phone or in meetings, listening, advocating, cajoling.  The story goes Johnson struck a deal with House Republican Leader Charles Halleck of Indiana by conceding to Halleck’s suggestion that Funding of his Alma Mater’s proposed NASA research facility at Purdue University could make a difference.  Johnson couldn’t think of a better place than North Carolina to incubate ideas of space exploration.

Johnson also needed the vote of Everett Dirksen of Illinois was a prominent Republican Senator.  Johnson instructed then Senate leader Hubert Humphrey to act as Johnson’s proxy with these words:

“You and I are going to get Ev. It’s going to take time. We’re going to get him. You make up your mind now that you’ve got to spend time with Ev Dirksen. You’ve got to let him have a piece of the action. He’s got to look good all the time. Don’t let those [liberal] bomb throwers, now, talk you out of seeing Dirksen. You get in there to see Dirksen. You drink with Dirksen! You talk with Dirksen! You listen to Dirksen!” [Source:  http://www.theatlantic.com/magazine/archive/2014/04/what-the-hells-the-presidency-for/358630/ ]

Now Johnson may not have felt like being civil with Dirksen, but he understood the importance of civility in moving an agenda.  I suspect Dirksen likewise knew the importance of communicating basic courtesy and respect if you wanted something from someone.  Civility is the grease that moves agendas through conflict to compromise.

Pope Francis would likely advocate that civility is our right to dignity as human beings.  I certainly like this high-minded assessment, and subscribe to it.  But I also recognize that  civility is highly practical.  Simple courtesy makes it easier to discuss subjects and get things done.  It allows the mind to remain open to new ideas.  It allows for good judgment to separate what is important from what is distracting.

In negotiation, there are basically four options:  I win and you lose; I lose and you win; I lose and you lose, I win and you win.  Notice that of these four options, only two allow you to win.  Stated differently, as you approach a communication, the rational approach is to focus on winning.   Most rational persons would, if they can, arrive at a win that avoids the risks of losing.  That option is the win / win.  A “win-win” generally requires the ability to see the other party’s viewpoint while disagreeing with it.  It keeps alive the question:  “Can I get an ‘acceptable’ outcome if not a perfect one?”   Do I want to gamble for “perfect?”  Acrimony only closes the mind to these questions.

Take Time to Manage Incivility as Any Other Cost

At work, incivility can reach toxic levels, turning to abuse.  One writer suggests a thorough background check of former managers and former subordinates to assess for incivility.  https://hbr.org/2016/02/how-to-avoid-hiring-a-toxic-employee .   Confidential telephone calls work better than written inquiries, states the writer.  I recently posted a list of self-defensive behaviors an abused employee can use to survive an abusive boss. Recovery Your Power. Restore Your Health. But so much wasted time and energy could be avoided by making the right hire in the first place.  Technical competencies and social-emotional competencies should be given equal weight in the hiring process.  Likewise, quarterly results cannot be sustained by burning out productive employees with abuse.  Longer term, the financial costs of leaves of absence and turnover are too high.

38% intentionally decreased the quality of their work.

66% said that their performance declined.

78% said that their commitment to the organization declined.

12% said that they left their job because of the uncivil treatment.

25% admitted to taking their frustration out on customers.

My experience is that the C-Suite doesn’t get it.  CFOs do not track for these kinds of costs, and of course, these are not costs found in quarterly or annual reports.  But these are real costs damaging the bottom line significantly.  The much-needed cultural shift in Human Resources is to move from defending the manager to a more scientific, quantifiable assessment:  how is this manager imposing unnecessary costs on the company associated with lowered employee morale, diminished innovation, increased leaves of absence, turnover, and even lawsuits?  The C-suite needs to take responsibility for a culture change that will allow Human Resources to take a proactive, aggressive role in identifying and curbing toxic managers.  Human resources must be empowered by the CEO to do more than rubber stamp management prerogatives.