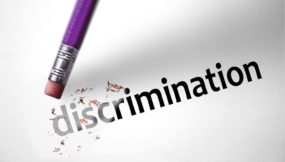 Discrimination and Implicit Bias – The Subconscious Operations of the Human Mind

Seldom is bias conscious.  We all like to see ourselves as “good” and so we suppress awareness of the “bad” qualities we of course have.  Start with a basic admission:  you are not a perfectly evolved human being.  Accept also that the most difficult task you face is to accept those parts of yourself that would shame, embarrass or humiliate you based on your distorted self-image.

The Legal Proof of Bias Does Not Rely on Science, But on Anecdotal Assessments of Human Behavior.

The legal burden of proof of a discrimination case is a combination of two phases.  The first phase is the “prima facie” case that the Plaintiff (employee) is in a protected category, that there is available work, that the Plaintiff is competent to perform the work, and has met the requirements of the job, has lost the job (or promotion), that persons outside the “protected category” [for example, persons of a younger age, different sexual orientation, different gender, or without a disability] received favorable treatment compared to the Plaintiff.  Finally, of course, the Plaintiff must show that he suffered economic and emotional harm as a result.   The second phase of the Plaintiff’s burden is to expose the Defendant’s (the employer) articulated “official” reason for the termination as a lie, or “pretext.”  This second phase is required after the employer’s manager testifies about the specifics of the non-discriminatory motive for the termination.  After all the evidence is in, the jury is required to find that it is “more likely than not” that the true intent of the termination decision was to discrimination because of race, age, gender, national origin, religion, disability, or like characteristic.

Psychology Offers A Different Approach to Proving the Presence of Bias.

But is this the way the world works?  Do managers act with conscious intent to discriminate?  I suspect that unless a person is an avowed racist or ageist, for example, the manager is quite certain in his or her own self-assessment that there was no bias in their decision to fire an employee.  In fact, I’m confident that manager will go to considerable length to justify the decision in such a way that the employee “looks good” not just to others, but most importantly, to himself.

So, where does psychology point us by comparison?  The  following video makes the case that when we are asked to associate “good” and “bad” words with faces, we may take just a bit longer [i.e., a fraction of a second] to associate a “good” word with a face of a different gender, race or age, for example.  That slight delay is an indirect indicator of a likely bias.  That is, our conscious mind is following an explicit direction, but our unconscious mind interferes with the task because it resists the association between the “good” word and a face we do not consider “good.”

An Easy Free Online Test is Available To Detect Your Own Bias, If You Dare to See.

The test is available without charge at Harvard Implicit Bias.  The basic underpinnings of how the test works are summarized at the Implicit Associations Test.

I propose a modification of the standard McDonald Douglas “shifting burdens of proof” outlined at the beginning of this article.  Juries can be assisted by an expert witness trained in administering and interpreting implicit bias testing.  Whether this bias operated to produce the decision to terminate the Plaintiff’s employment is a separate element to be proven by other evidence.  However, this testing data will supplement Plaintiff’s ultimate proof that discrimination was the “substantial motivating factor” for the employment termination decision. This type of scientific evidence should be admitted as well grounded in research, generally accepted in the scientific community, and the subject of numerous academic articles.  Further, bias testing results are a fair and reasonable rebuttal to the inevitable denials by managers under oath that discrimination played any role whatever in their decision to terminate the Plaintiff’s employment.

For further description of how the testing works, see the video following: