Independent Contractor? – The ABCs of the New California Definition 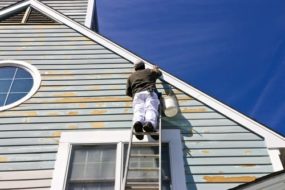 Jake paints houses.  He has been doing this work for 20 years, and he’s getting a bit stiff in the joints.  He’s also been getting a bit stiff smoking joints during business hours.  But, why worry.  Jake’s an “independent contractor.”  He can’t be forced to take a drug test.  Jake fell off the wagon more than once, but last week he fell off a ladder while painting a house.  He got the gig from Bright House Painting Company.  Bright House has a portfolio of jobs, and farms out the work to its “independent contractor” painters, one of whom was Jake.

Jake has his own business card, takes or leaves a job when he wants, and generally will decline Monday jobs.  He’s also pretty good at what he does, and just show Jake the job, and he gets it done.  Bright House basically leaves him alone.

But then the perfect legal storm.  Jake sued Bright House for workers’ comp, claiming he was an employee.  When Jake fell, he landed on a steel pronged garden rake that penetrated his back and caused extensive blood loss and internal injuries, so he also sued the homeowner.  The Employment Development Department also received a claim from Jake for disability benefits, and when its records revealed that Bright House had paid zilch into a disability or unemployment fund for its “employees,” it conducted an audit and shut down Bright House until it paid hundreds of thousands of dollars in back taxes.  The I.R.S. was looming in the future.  Bright House folded.  Its owners disappeared, formed a new corporation, and set up a new business.  But Jake wouldn’t have it.  He sued the owners too, claiming they were using the corporation for their personal gain and to commit fraud.

THE ABC BARRIER TO BEING AN INDEPENDENT CONTRACTOR

This sounds like a complicated mess, but if you believe the spin on a recent California Supreme Court decision, it can all be sorted out rather quickly.  In fact, it’s a simple as “ABC” or more precisely, the “ABC Independent Contractor” test.  Here’ how it works:  You need A, B, and C, and not one letter less, to be an independent contractor.  Take the baseball analogy:  the batter gets three strikes, but an employer gets only one.  What’s more, the employer can hit two consecutive hits, but he has to hit all three to get on first base as an employer.  Are you surprised to learn that most employers strike out under the ABC test?

“A” is for “autonomy:”  The worker is free direction and control by the hiring Company.

“B” is for “bucket:” [my term, definitely not the Court’s]  The kind of work performed is in a different bucket [category] than that of the hiring company.

“C” is for “customarily:” The worker “customarily” works in a business of her own with multiple projects and clients.

Is Jake an independent contractor?  Only if all three factors are satisfied.  Let’s do the “ABCs.”

Jake had autonomy, mostly because he was very good at what he did, and was pretty focused when he worked, despite the joints.  Usually, Bright House had a drive-by supervisor who checks on work but didn’t provide direction.  Although it’s another close call, put a check in the “A” column.

What about the “C” column?  Who cares?  Bright House has already lost.  But “C” could be debated if on the table:  Jake worked for multiple companies, sometimes two on the same day.

THE CONSEQUENCES OF THE INDEPENDENT CONTRACTOR MISCLASSIFICATION

So the “ABC” of it may be simple, the resulting consequences are not simple.  Jake owes back taxes, and so does Bright House.  The homeowner is potentially in trouble too for not having workers compensation coverage for Jake, and since Jake doesn’t have workers compensation, he’s more motivated than ever to get his medical bills paid by the homeowner for leaving that rake on the ground with its teeth just waiting for Jake’s back.

But what about the gig economy?  Uber and Lyft drivers are “independent contractors” in California, are they not?  And what about Graphic Delights LLC overload work farmed out to graphic artists via internet connections?  What about the status of freedom-loving freelancers everywhere?  Has the California Supreme Court just imprisoned them to be treated as employees by fearful employers who don’t want to be tagged for insurance, tax, and benefits liabilities, not to mention the enormous hidden costs of administration?  And consumers, like you the reader, won’t you be paying more for services as the “employer” now passes those extra costs onto you the buyer?  The answer in most cases is “yes,” to all the above grave consequences.  The tax and insurance agencies are likely to rely on the Court’s ABC test for the sake of consistency and simplicity.  It would be a strange world in which a California Uber driver would be an “employee” for purposes of anti-discrimination or anti-harassment, but not be an employee to collect unemployment insurance benefits.  Is it possible?  Yes. Is it rational?  Not quite.

THE EXTINCTION OF THE INDEPENDENT CONTRACTOR IN CALIFORNIA?

So, the gig economy is not the gig it was, and employers are going to pick up about 25% in tax and payroll contributions as new costs, while freelancers won’t feel so free, but there will be greater protections and benefits.  So, going forward, the labels and the agreements don’t matter: “employee” by any other name yet labors under the protections of the Labor Code.