The Truth – Does It Matter? 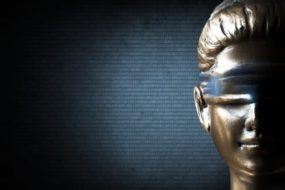 The “truth,” — does it matter?  John Adams, patriot and President said in essence that when the smoke clears, only the facts are left standing.  Maybe false information is like an army of cut-out cardboard soldiers, aligned for battle, but falling in the hot winds of truth.

The multi-layered and sometimes arcane rules of evidence are focused on seeing if the “facts” are indeed facts or merely  speculation, or empty argument.  It is possible to think of the judicial process as one intense effort to separate fact from the and to separate good argument from bad.  argument is separated from bad argument by facts.

We live in a political environment more corrupted than ever a malalignment of the facts. In the law, I see this as a misquoting of case reasoning or holdings.  In oral argument, I hear it as the use of a patent falsehood or the telling of a misleading half-truth.   Sometimes I am left stunned by the bold disregard of the truth.

But judges have no stake in the game except to arrive at a correct decision.  Good judges know their limits, and those limits are set by the rules of evidence and the guiding case law.  I see this judicial temperament inwritten trial court and appellate decisions. Generally, those decisions are reasoned conclusions based on the facts of the case.  Not all the facts, because the facts of the case are not all the facts. They are the facts that somehow traveled through the hot desert of evidentiary objections and poor advocacy to reach the thinking of the judge.  For the most part, I am impressed by the mental acumen and diligence of judges, even when they think and rule differently than I would like.  Judges after all, unlike my opponents, do not get up in the morning and immediately think of ways to stretch or hide the truth.  [Of course, my opponents think the same of me and my clients.]

In employment law, the companies I sue and take to trial have stories to tell, as does my client. Those stories stand or fall on two legs: the facts, and the ability to get the facts admitted into evidence.  The heavy burden of the good lawyer is admissibility.  That itself requires two steps:  get the facts, then make them admissible.

Hearsay, relevance, and lack of foundation are the great barriers to admissibility.  Stated simply:  you must present the person who had the direct experience of an event, you must show the event is relevant to an issue in the case, and then you must showcase by foundational questions that the person and the event are virtually one and the same.  For example, the witness in a contract dispute might say:  I saw this document and I recognize it, and I remember signing it, and yes, that’s my signature.  The witness might even be able to authenticate the signature of the other party by testifying:  Yes, I recognize the defendant.  Yes, he was in the room and seated at the desk when the agreement was presented to us for signature.  Yes, I saw the defendant look over the document, then I saw him place take a pen and write something on the signature line. That scribble there with the defendant’s name under it, is that the scribble you saw the defendant place?  Yes.

All this systematic effort is designed to separate fact from lies, arguments, and distortion.  I wonder how an astute judge of the law watches one of the nightly “news” stations left or right.  I suspect the analytical part of her brain goes into overdrive, making and ruling upon her own until virtually nothing is left for admissibility.

My reflections on this subject of the truth began with an article from the New York Times about pregnancy discrimination.  The article lists a number of individual cases against a specific warehousing management company.  The core of the cases is that the company management forced women to work while pregnant and ignored their requests for a lighter workload, with the result they lost their unborn babies.  The reporter cited statements from the women lawyers and quotes from the Company’s spokespersons.  The stories were .  No surprise. https://www.nytimes.com/interactive/2018/10/21/business/pregnancy-discrimination-miscarriages.html

But where in this clash of opposite stories are the facts?  Where is the truth?  We want simple answers, but simple explanations are sometimes deceptive. The “bad” employer that oppresses the “good employee” to “cause” the loss of a child, is not a story, but an assigning of labels as part of an argument.  The hard work of getting to the facts is seen by the equivocal scientific evidence that lifting heavy objects an undue risk to pregnancy.  Yes, miscarriage is a risk for some pregnancies, but that category is usually a “high risk” category and not all pregnancies generally. Also, what is the evidence that the employee in question requested an accommodation, and that her physician evaluated her risks, and then provided her with written support she delivered to her employer?  Where is the evidence that her employer, consistently with the law, upon receiving the pregnant employee’s informal request for light duty, undertook its legal duty to assess the need for the accommodation by requesting the needed information from the woman’s physician, while providing that physician with a true and complete statement of the physical demands of the job?  These are the legal and factual questions of the case, and they require evidence.

My final reflection on the value of the facts is that judges and juries must decide what are facts based on evidence, but they do so without knowing with certainty that they are correct. The law does not require that level of certainty.  The law in civil cases to the contrary allows for 49.999% uncertainty.  That is, it allows for a “conclusion of fact” based on a “preponderance of the evidence.”  A preponderance is that 50.001% level of “certainty” that tilts the scales.  It is as though a person is asked: “Do you believe John?” and answers “sort-of.”  But this measure of certainty is a wise reflection that we humans can only exercise our best judgment of the truth in matters not as clear as the “facts” of gravity or heat.  This uncertainty factor is one of the reasons cases settle.  https://employee-rights-atty.com/consideringemploymentlitigation/