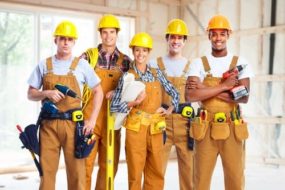 Wage claims are ubiquitous in the private building industry.  This story is a fictional account of carpenter Jesus Martinez whose employer failed to pay his wages and has disappeared, leaving only a shell corporation. The year is 2018. The employer promised Jesus to just “hang in there” because the employer was anticipating an infusion of cash from the general contractor on a major muti-dwelling residential building contract. Of course, that was a lie. The general contractor had already paid Jesus’s employer. Jesus’s employer had diverted the funds to other business and private purposes. Now Jesus and his ninety-nine co-employees were left holding the bag.

Fortunately for Jesus, he and his co-workers lost their money in 2018, and so have access to a new law giving them the right to collect their unpaid wages and fringe benefits from the general contractor, and any other subcontractors upstream from their employer.

Wage Claims Against a Building Subcontractor Are Now Collectable From the General Contractor.

The law applies only to building and repair contractors who make or take a contract in California. It only covers private contractors doing non-government building construction or repair. Some bad news is that the law does not allow an unpaid employee to recover civil penalties against the upstream contractors. Enforcement is through the California Department of Labor Standards Enforcement by civil action. Alternatively, the employee may elect to be a “Private Attorney General Act” representative for recovery of the unpaid wages for all the employees shorted in pay. Still, the upstream general and subcontractors are limited to paying wages, benefits, and interest.

The new law, Labor Code Section 218.7, has a one-year statute of limitations. The timeline to file runs from the date or recordation of a “notice of completion” of the work by the “direct contractor,” or that contractor’s “notice of cessation” of work, or by the date of actual completion of the work.

The law includes a provision allowing the general contractor to require all lower level subcontractors to produce payroll records including fringe information for their employees.

Wage Claims By Construction Workers Are More Likely To Be Paid Quickly Without Litigation.

How did Jesus use the law? When his employer disappeared, he promptly united with his cheated co-workers to seek legal help. His lawyers cited Section 218.7, and the threat that 100 of the employees would combine under the “Private Attorney General Act” to negotiate a payout from the General Contractor. The General Contractor then was left to chase down its recalcitrant subcontractor for recovery of the pay-out. As for Jesus, he felt relieved that when he went on a big project for a small contractor, his wages could be collected from larger fish up the feeding chain.